Suffering from behavioral and mental disorders is difficult. This is especially the case when the mental and behavioral disorder that you suffer from is rare like schizophrenia is. In fact, schizophrenia only affects around 0.25% to 0.64% of people in the United States. That means that less than 1% of the American population understands what it’s like to have schizophrenia. When you pair up schizophrenia and addiction, the number of people who understand your struggle becomes even less.

If you or someone you love has schizophrenia, it’s important to understand what causes the disorder, how the disorder works, and what to do to treat it. Learning these things can help individuals learn how to function with schizophrenia. When you suffer from a co-occurring disorder of schizophrenia and addiction, you must also learn about what causes addiction, how addiction operates, and how to treat substance abuse. That way, you can understand how these two disorders affect one another.

Ultimately, learning about the causes, symptoms, and treatments for both schizophrenia and addiction will help you figure out what treatment plan you should use to treat your dual diagnosis disorder. With the right dual diagnosis treatment, not only will you be able to function with schizophrenia and addiction, but you’ll even be able to thrive with it also. 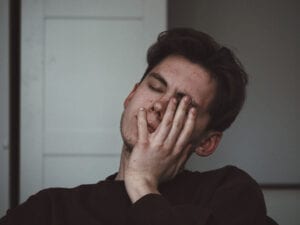 Schizophrenia is a mental and behavioral disorder that causes you to interpret reality in an abnormal way. People with schizophrenia often experience hallucinations, delusions, and disordered thinking and behavior.

Although signs of schizophrenia will appear from childhood, most people don’t fully develop their schizophrenia until their late teens or early adulthood. Once schizophrenia develops, it doesn’t go away. Thus, it’s a lifelong disease that you must manage every day to function in society like everybody else.

There are many signs that a person may have schizophrenia. One of these signs is appearing flustered all the time. Although being flustered can be a normal personality trait or reaction, when this behavior frequently occurs and is associated with anxiety and a lack of focus, it could be an early warning sign of schizophrenia.

There is a long list of symptoms that people with schizophrenia often experience. Most of these symptoms occur once the disease has become full-fledged.

People with schizophrenia often experience delusions. Delusions are false beliefs that aren’t based in reality. For example, individuals who suffer from delusional thinking may believe that others hate them, even if it’s far from true. Or, they may think certain individuals are in love with them, even if they are not.

Hallucinations occur when you see or hear something that doesn’t exist. Hearing things that don’t exist is the most common form of hallucinating.

A person with disorganized thinking and speaking will have poor communication skills. When people suffer from this schizophrenic symptom, they will answer questions in a way that makes no sense. Although rare, some schizophrenic people’s thoughts and speech are so disorganized that when speaking at all, they stream random words together and make no sense.

Schizophrenic people with disorganized or abnormal motor behavior will fidget and display inappropriate posture and excessive movement. People that suffer from this schizophrenic symptom also lack the ability to focus. This symptom of schizophrenia can range from subtle to severe.

This symptom encompasses anything that causes a person with schizophrenia to not function properly in society. Examples of generally negative schizophrenic symptoms include a lack of personal hygiene and the inability to make eye contact.

Individuals may also be unable to speak with animation or make facial expressions when around others. Because people with negative schizophrenic symptoms struggle functioning in society in social situations, they often withdraw themselves from any social activities or interactions.

The exact cause of schizophrenia is still unknown. Researchers believe that it’s likely a combination of the following factors.

Your genetic makeup is likely the most influential factor as to if you’ll develop schizophrenia or not. Essentially, if you have an immediate family member with schizophrenia, you may be likely to develop it as well. While you can pinpoint many diseases to one gene, researchers think that a combination of genes within a person can create the perfect storm for schizophrenia to develop.

2. Structural Changes in the Brain

3. Chemical Changes in the Brain

One neurotransmitter in the brain that for sure has an effect on the development of schizophrenia is dopamine. This is because dopamine causes the brains of people with schizophrenia to overstimulate.

Using drugs like marijuana, cocaine, LSD, or amphetamines can trigger symptoms of schizophrenia in people that already have a predisposition to developing it.

Addiction to substances occurs when a person that already has a dependency on substances cannot function without them and is willing to do almost anything to remain using them. People are dependent on substances when they experience withdrawals whenever they minimize or discontinue their use of them.

Addiction takes dependency a step further by causing the addict to exhibit risky, unhealthy, and dishonest behaviors to get more alcohol or drugs. For example, a person may be willing to steal just to get more drugs when he or she has an addiction.

Signs and Symptoms of Addiction

There are many factors that can cause a person to develop an addiction. Most of these factors fall under the categories of genetics, environmental factors, and exposure.

Men have higher rates of addiction than women. Despite this fact, women become addicted to substances quicker through smaller doses. Women also relapse and suffer from dual diagnosis disorders more often than men do. Drugs causing pleasure feeling neurotransmitters in the brain to release chemicals also help cause addiction.

The way that you were brought up as a child also plays a major role as to whether or not you develop an addiction. If you grew up in a home or environment where alcohol and drugs were often used and abused, you become desensitized to substances and their effects. As a result, you’re more likely to use substances yourself and not recognize when you are abusing them.

Feelings of loneliness, stress, and fatigue can cause a person to turn to substances to cope. Over time, that person’s use of substances can turn into dependency which can then turn into an addiction.

The Effects of Schizophrenia and Addiction

Schizophrenia and addiction can lead to adverse effects with one another. To make matters worse, when a person with schizophrenia also develops an addiction, that person then becomes less likely to take their own schizophrenia treatment medicine. Therefore, symptoms of schizophrenia become more intense.

Why Simultaneous Treatment of Co-Occurring Disorders Is Important

Treating co-occurring disorders simultaneously is important because if you leave one of the two disorders untreated, it increases the chance that the other disorder will develop once again. This is especially true since many substance use disorders develop due to people suffering from mental illnesses like schizophrenia. Thus, treating addiction without treating schizophrenia isn’t getting to the root of the problem.

On the other hand, treating schizophrenia without treating addiction will cause you to continue your unhealthy addictive behaviors which can then cause your schizophrenic symptoms, like hallucinations, to come back up. This is especially true with schizophrenia and addiction since the symptoms of these two disorders are similar.

Silver Linings is Here to Meet Your Needs

At Silver Linings Recovery Center, we provide dual diagnosis treatment for a wide variety of substance use disorder and mental illness combinations, including schizophrenia and addiction. We also provide addiction treatment and therapy services for countless substance use disorders and mental illnesses individually. To learn more about the services that we provide here at Silver Linings, contact us today.

Call us to speak with a drug and alcohol addiction treatment expert, and get on the path to rehabilitation today.

Silver Linings Recovery Center is open, accepting new clients, and is here to support our recovery community during this pandemic. If you have ANY questions feel free to give us a call at (844) 546-4644 and one of our directors will work with you or your loved one the care you need.