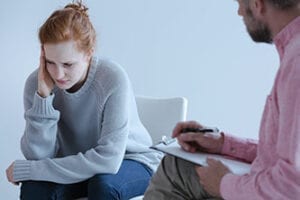 Obsessive-compulsive disorder (OCD) is a chronic mental condition that causes individuals to feel the need (compulsion) to engage in repetitive routines or else has repeated thoughts. As an anxiety disorder, an individual often has unruly and undesirable thoughts and rituals characterized by behaviors one feels forced to do. Sometimes, OCD and other disorders co-occur, intensifying their effects. This may happen in the case of OCD and addiction.

Obsessive-compulsive disorder begins with patterns of undesirable or unwanted thoughts that cause people to repeat certain behaviors. These thoughts interfere with one’s routine, sometimes in severe ways. If you are struggling with OCD, you may realize that your behaviors and thoughts are not logical, but you feel compelled to do them.

About Obsessive-Compulsive Disorder: Types and Stats

There are various types of obsessions and compulsions that commonly occur when someone is struggling with OCD. Below are some typical ones:

Based on the American Psychiatric Association (APA), OCD is common in females than in males. However, OCD affects people from all racial and socio-economic backgrounds.

Both obsessions and compulsions characterize OCD. Obsessions are reflexive thoughts or impulses that happen repetitively in your head and you can’t control them. Moreover, OCD’s obsessive thoughts are distracting and disturbing.

Compulsions are distinguished by rituals and behaviors that the subject feels compel them to do and redo come actions. They are as a result of attempts to fight the obsessions. The symptoms are different for compulsion and obsessions.

Below are the symptoms you may experience as a result of obsessions:

Obsessions in OCD result in compulsions in an attempt to avoid the obsessions. Most of these compulsions are unrealistic, yet an individual feels the need to achieve them.

Below are the symptoms you may experience as a result of compulsions:

Despite research, the exact cause of OCD is unknown. However, this disorder is thought to be a neuro disease. Some researchers believe that an abnormality with their neurotransmitters may be the cause of obsessive-compulsive disorder. Also, OCD is thought to be triggered by several factors. These include environmental, neurological, cognitive, behavioral, and genetic factors.

One may classify OCD as a genetic disorder because there is evidence that it tends to reoccur among generations of relatives. Studies show that individuals can inherit OCD symptoms. However, there is no gene associated with causing the disorder.

The theory behind this is that people with this disorder learn to associate particular objects and circumstances with fear. This fear then leads to avoidance rituals in an attempt to reduce fear.

Cycles of fear and avoidance often are accompanied by stress periods, such as a break-up, death, or a new responsibility. When the connection between fear and an object or circumstance is established, the individual learns to avoid fears rather than confronting them. Avoidance leads to compulsive behavior or OCD.

The cognitive theory centers on how people misinterpret their thoughts. The majority of people often have unwelcome and invasive thoughts at times. However, for people with OCD, the essence of such thoughts is magnified. Such people overemphasize the importance of these thoughts and treat them as a significant threat. It leads to avoidance and ritualistic behaviors as long as the individual treats these thoughts as catastrophic.

With the advancement in technology, psychiatrists can perform brain imaging to study brain activity. Brain scanning and imaging have allowed scholars to study people’s brain activity with OCD and compare them with regular brain activity.

It has been found that people with OCD have different brain activity than those without OCD. It is thought that chemical imbalance, such as glutamate and serotonin, in the brain may contribute to this disorder.

For people predisposed to the condition, environmental stressors may contribute adversely to OCD. The most common form of environmental stimuli is traumatic brain injury (TBI), especially in children and adolescents.

According to the National Library of Medicine, 30% of TBI victims between 6 to 18 years developed OCD within 12 months. Those diagnosed with the disorder have also reported having experienced a traumatic experience before the onset of OCD.

OCD is an anxiety disorder and is one of several psychiatric disorders associated with substance abuse. As per the Anxiety & Depression Association of America (ADAA), roughly 20 percent of individuals with anxiety disorders abuse drugs and substances.

However, drug and alcohol abuse does not solve OCD. It makes it even worse. Having an anxiety disorder combined with a drug or alcohol addiction is dangerous because addiction is a compulsive behavior resulting from the repetition of a destructive behavior despite the consequences.

In as much as the individual treats the drug and alcohol abuse as an escape, it may soon turn into an addiction of a dependence. It makes treating obsessive-compulsive disorder more challenging.

Research by the Journal of Anxiety Disorders showed that over 27% of those with OCD abused drugs. 70% of them began using drugs one year after first seeing the signs of OCD. It implies that OCD and addiction go hand in hand.

Few specialized institutions deal with the treatment of OCD and addiction, making it very challenging. People with OCD and substance abuse tend to be very secretive, and even fear seeking help or even telling their loved ones. It is essential to curb the disorder before it advances, leading to habits associated with obsession, compulsion and avoidance, and drug and substance abuse. For those with an already advanced form of OCD or a dual diagnosis, family intervention is necessary.

OCD is the most common management plan involving the use of antidepressants such as selective serotonin reuptake inhibitors (SSRIs), cognitive behavioral therapy (CBT), or both. CBT involves therapy directed towards changing the way you think, behave, and feel.

It focuses on alteration through interpretation. There are two forms of CTI:

On the flip side, SSRIs are drugs such as fluoxetine, sertraline, and fluvoxamine that are prescribed to help curb anxiety and stop OCD. These drugs are often used in higher amounts in OCD patients in depression patients and take time to effect change. For individuals who don’t respond to treatment, atypical antipsychotic medications are used in combination with SSRIs to effect change.

For those with dual diagnoses, OCD, or drug and substance abuse, specialized care is necessary. These individuals need a specialist who understands both conditions and how they interact. It calls for family members and friends to discover their addiction and OCD and push them to seek help. They can then help the subject check into a specialized medical dual diagnosis institution such as Silver Linings Recovery Center to get the help they need.

Silver Linings Recovery Center is an addiction treatment center located in Langhorne, Pennsylvania and East Windsor, New Jersey. Our team is committed to the successful rehabilitation of those struggling with drug and substance abuse.

We have been providing rehabilitation to individuals for over a decade. We use a holistic approach to helping you approach and overcome anxiety and OCD issues, in combination with drug and substance abuse. Contact us to get the help you need now. Our team looks forward to assisting you on the journey to recovery!

Call us to speak with a drug and alcohol addiction treatment expert, and get on the path to rehabilitation today.

Silver Linings Recovery Center is open, accepting new clients, and is here to support our recovery community during this pandemic. If you have ANY questions feel free to give us a call at (844) 546-4644 and one of our directors will work with you or your loved one the care you need.